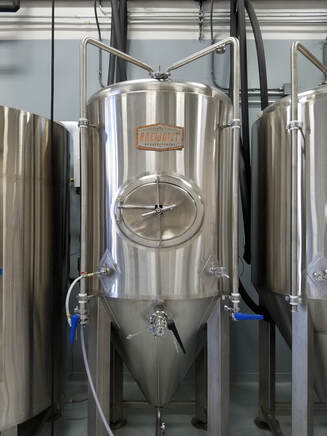 BEARDED PREACHER'S WIFE IPA
ABV 6.2%     IBU's 49
Our signature IPA is a balanced blend of American Pale Ale malt and New Zealand Hops fermented with Norwegian Kviek Yeast for a burst of sweet mandarin orange and tropical flowers.  As for who's bearded, the preacher or the wife, you'll have to come in for the full story.

KILTED YOGA Irish Red Ale
ABV 5.2%     IBU's 20
This amber-colored, malty beer with notes of toast, caramel, and butter, was originally brewed as a seasonal St. Patrick's Day treat, but overwhelming enthusiasm in the taproom quickly promoted this brew to flagship status.  With a low hop presence, rich malty flavors, and dry finish, we've been told it's hard to enjoy just one. 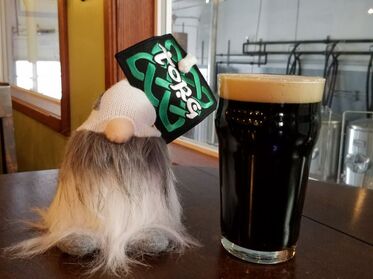 BRIGID'S BATHWATER Dry Irish Stout
ABV 4.9%     IBU's 37
Brigid's is a classic dry Irish Stout, reminiscent of Guinness, with a medium body, a smooth roast aroma and flavor, and dry finish.  We use Marris Otter malt, plenty of flaked and roasted barley, and East Kent Golding Hops to create a perfectly nourishing and enjoyable pint - one we hope St. Brigid would be pleased to bless.

SQUIRREL NUTKIN London Brown Ale
ABV 4.8%     IBU's 21
Brewed with premium English malt and hops, this malt-driven ale imitates the sweeter Southern British Brown ales with notes of caramel and a hint of walnut.  We serve our Squirrel on nitro for a smooth, medium body and creamy head.  Many who have professed to shun dark beers have been turned to the dark side with Squirrel Nutkin.  And yes, Torg celebrates Squirrel Appreciation Day every January 21st (coincidentally, the brewster's birthday).  Cheers! 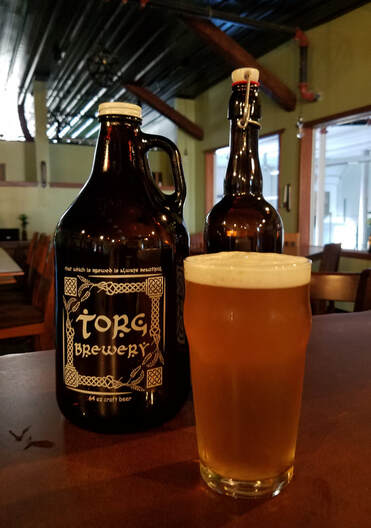 PILSBRUCKER Kolsch
ABV 5.5%     IBU 22
Brewed as a SMaSH beer with two simple ingredients, Pilsner malt and Hallertau Hersbrucker hops, Pilsbrucker is a light-bodied, quaffable beer with low hop presence and slight apple and pear notes.  Though ordinarily a summer beer, this Kolsch is enjoyed year round at Torg.  It's cheaper than a flight to Florida in January, and just about as sunny, bright, and luxurious.
​
LIBIDINOUS Hefewiezen
ABV  5.8%     IBU's 11
Our classic German Wheat beer is ripe with banana and clove flavors and aromas, luscious on the lips, and spirited to boot!  Summer, winter, rain, or shine, Libidinous is found on tap year round at Torg.
ROTATIONAL/SEASONAL 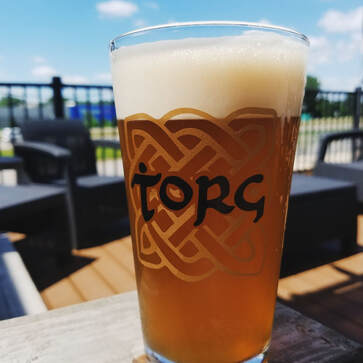 RANDY PARAMOUR
ABV 4.9%     IBU's 19
Brewed to round out our menu with an approachable, easy drinking American Blonde Ale, Randy Paramour is brewed with English mild malt for more golden to amber hues than traditional blondes and subtle toasty-sweet notes.  Mildly hopped with noble hops and session strength ABV, this is a great lawn-mower brew to relax with after chores or at your next backyard BBQ.

​
​POMELO ZEPHYR
ABV 6.6%     IBU's
Pomelo Zephyr is an unfiltered summer ale, tart and refreshing, with lemon and grapefruit notes, served on nitro for a soft body and creamy head.  Named after the marriage of Asian Giants and Greek Gods, this brew is a soft, citrusy brew on a hot summer's day. 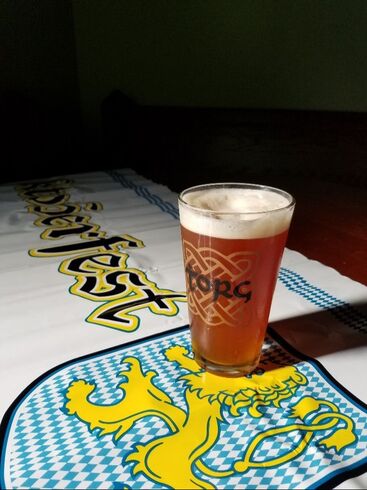 BRAUTBIER ("Bride's Beer)
ABV 6.2%     IBU's 23
BrautBier is a traditional German Marzen – a malty, full-bodied, copper-colored beauty - with which we salute the guest of honor at the Original Octoberfest, Princess Therese!  BrautBier is brewed with German Pilsner and Munich malts and just enough hops to balance the malty sweetness.  We incorporate a German decoction mash, in which a portion of the mash is drawn off and boiled and then returned to the main mash in order to promote the full flavor of the malt in the final beer.  Fermented slowly at low temperatures and lagered for many weeks, we hope BrautBier is worth your wait!
FERNWEHATOR ("Farsickness" or a longing for far off places)
ABV 7.6%     IBU's 18
Released during the spring Pandemic Shut Down of 2020, our doppelbock called to those longing to be out and about, released from the confines of their four walls to enjoy the pleasures of life once more.  Incorporating a traditional decoction mash and heaps of German malts, Fernwehator is a rich, malty brew, slightly sweet and boozy on the pallet with a low hop profile.  Doppelbocks are bigger and stronger versions of the German bock lager, and Fernwehator is no exception, with an ABV of 7.6 and luscious bready and dark fruit flavors. 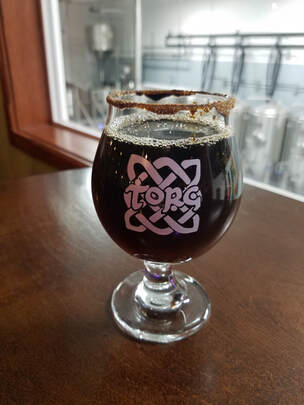 CONFLICTED KRAMPUS Spiced English Mild
ABV 4.5%     IBU's 19
Conflicted Krampus is the second beer in our English Mild series.  Brewed with a blend of Golden Promise and English Mild malt, we skipped the aroma hop for an addition of freshly grated ginger root, cinnamon sticks, and allspice in the whirlpool to create a subtle ginger warmth in the finish of the beer.  Debuting on Krampusnacht, this holiday "gingerbread" beer is served in a cinnamon-sugar rimmed glass for a truly alluring aroma.  Naughty or nice, we hope you enjoy our Conflicted Krampus Spiced English Mild Ale.


GUILTY MARDER Dunkelweizen
ABV 5.9%     IBU's 13
This traditional German wheat beer is brewed with an addition of Dark Wheat and Munich Malts for a darker color and sweet malty flavors.  Hefeweizen yeast blends in banana, cloves, and fruity esters to create a mischievous brew with jam and toast notes. 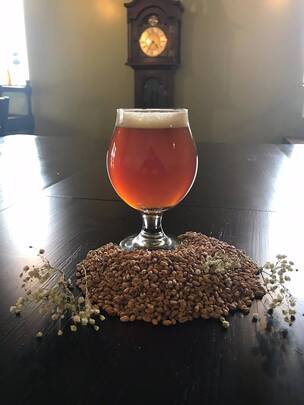 EYED DEW EWE Belgian Saison
ABV 6.1%     IBU's 28
A complex fruity beer thanks to the workings of Trappist Yeast, this brew flaunts apricot and peach aromas and signs off with a peppery flourish.  Now we debate the return of this brew or it's sequel, Eyed Dew Ewe Two. 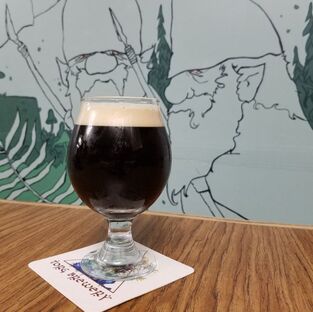 HEN'S CASTLE Chocolate Stout
ABV 5.8%     IBU's 28
Brewed in honor of Grace O'Malley, Ireland's Pirate Queen, we used chocolate malt and raw cacao in the mash to produce a "tootsie roll" aroma and subtle, dark chocolate notes.  Smooth and satisfying, Hen's Castle is the perfect pint to relax with after a rough day of piracy on the open seas.

THIRD THURSDAY American Porter
ABV 6.7%     IBU 38
Torg's gift to you each Holiday Season, Third Thursday Porter is brewed in the waning days of September, then aged and matured on "spiritized" American Oak Spirals as the leaves fall and the first brisk winds of winter make their appearance.  Released just in time for Thanksgiving, we hope this smooth, dark, delicious brew with hints of oak and whiskey braces you for the onslaught of winter festivities and dropping temperatures. 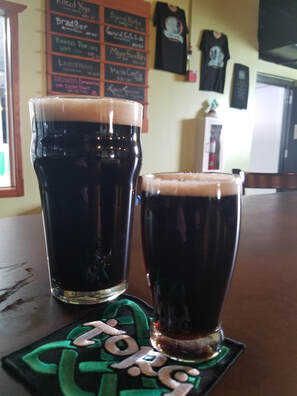 OPACA SILVA Specialty IPA
ABV 5.1%     IBU's 38
Opaca Silva is a collaborative brew with Nathan Steigman, local MN home brewer and winner of 2019 MN Home Brewer's Association's (MHBA) Iron Brewer Competition.  Torg agreed to work with the winner of the contest to upscale their recipe for production and presentation on our taps.  Challenged with incorporating wood into an original recipe, Nathan developed a session-strength, dark IPA, aged on hickory wood for the contest and we are honored and pleased to bring a truly unique, captivating brew to our taps.  Congratulations Nathan on a job well done!

SCHWARZCHILD SOLUTION German Schwarzbier
ABV 5.5%     IBU's 27
Our Thuringian-style Schwarzbier is a light-bodied lager with a clean, rich malt backbone of German Pilsner and Munich Malts.  A small addition of Chocolate and Black malt create a dark brew with no roast character.  Subtle earthy notes from Noble Hops and hints of chocolate finish crisp and dry on the pallet.